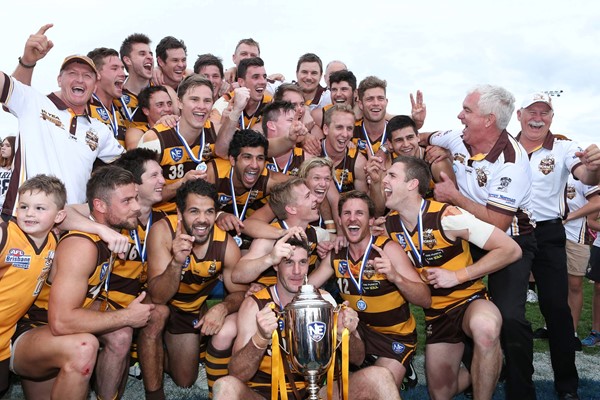 During the 2020 AFL Season changes, the second tier East Coast AFL competition which the Aspley Hornets had participated in since 2009, was suspended and ultimately terminated.  The AFL had determined that the NEAFL competition as it has most recently been known, was not viable in the near future in its existing form due largely to the financial and logistical impact of the Covid-19 pandemic.

The AFL evaluated what second tier competitions would exist for the 2021 season on onwards and have created an expanded VFL/East Coast competition.

In accepting the license, the Club has ensured the existence of a community-based pathway club in Brisbane’s northern region.  With Southport, the Gold Coast Suns and the soon-to-be Springfield based Brisbane Lions as the other Queensland clubs participating in the East Coast league, the Aspley Hornets are likely to also represent and provide pathways for the Greater Brisbane area.

The Club is very well placed to capitalise on the regional partnership and exciting corporate opportunities that will arise through participation in the East Coast VFL competition for the benefit of the Club, its membership and for the region as a collective.

As always, the Aspley Hornets will continue to focus on the strong growth of all of its football programs and look forward to continuing to grow the strength of the QAFLW program, its senior men’s community pathway, currently at QFA Division 1 level, and the ever growing junior and youth, male and female programs.

The Club will continue to share further information about both competition details and regional partnership development as it becomes available.

Statement regarding AFL changes to the NEAFL 2021

Subject: Statement regarding AFL changes to the NEAFL 2021

Yesterday, Monday, August 24th, 2020, the Aspley Hornets Football Club Board of Directors received an email notification of the AFL’s decision to amalgamate the NEAFL competition with the VFL from 2021 and beyond.

This announcement was shared publicly via the media shortly afterwards.

While the Board has been working closely with the AFL, and AFL Queensland, regarding how the football landscape will look like in 2021, we were extremely disappointed to receive this email. Being only one of three inaugural NEAFL clubs remaining in that competition, and arguably the league’s most successful club since 2011, we are unsure on how our investment in providing player pathways to the AFL will look in the near future.

The Aspley Hornets Football club has been invited to join the VFL in season 2021, however, in order to conduct our due diligence, the Board of Directors awaits further information from the AFL in regards to; participation details and criteria, the proposed competition structure, rules, regulations and importantly the funding model from the AFL.

This due diligence process will include the impact this will have on our club, the wider community, all financial implications as well as the #ONECLUB culture we have been building over the last two years.

Season 2021 is not far away, and this is a significant change to the way our senior football program operates and requires the Board to review what is being proposed thoroughly.

I will endeavour to provide accurate and timely information about the options presented and our decision as soon as they become available.

Hornets Members, a small change today from QLD Government about drinking & eating in the club. We appreciate your understanding and look forward to seeing you in the club soon 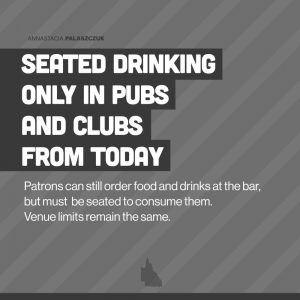 Changes to our Gaming room from tomorrow

Conditions of entry that have not changed

As always, the safety of our members & team is our priority. The club will operate under the approved industry COVID safe plan with strict guidelines and restrictions. We appreciate your cooperation and understanding with these restrictions.

From Monday 6th July we have new BISTRO booking times

WHATS CHANGED?
You can now approach the bar to order drinks or place a Keno bet. You can also move throughout the venue during your visit however we will still be providing table service for meals in the bistro.

CONDITIONS OF ENTRY
Members can only enter the club through Reception, and exit the same way
Because of COVID tracking requirements you MUST be a member to enter the club, you can sign up at Reception on the day or online prior to your visit
We ask that you do not visit the club if you are unwell or showing flu like symptoms
Bookings are required for dining in the bistro and recommended for Cafe however we can accommodate walk ins if we are not at capacity
Give is a call on 0732635522 and chat to our friendly reception team to book your table today

We are very excited to confirm that the Premier has moved Stage 3 to this Friday 3rd July, at 12noon therefore our club member limits will be increasing and our gaming room will reopen!

Our bistro dining will increase from Friday and changes will be made to our booking times now that we can accommodate more members. At this stage we will remain closed for Sunday lunch in the bistro but the Cafe is available to enjoy on our new deck facilities. Premiers Bar opening times remain the same with the limit increased to 30 members (inside) and more on our outside deck facilities.

Our team are working hard to confirm the finer details of the Premiers announcement this afternoon and how this affects us and hope to be in touch with more information tomorrow.

Thank you for your ongoing support,
Danni & the Hornets Team

AFL Announcement regarding the 2020 NEAFL season

The Aspley Hornets Australian Football and Sporting Club Ltd would like to advise all of its members and invested stakeholders about the NEAFL 2020 season.

Today the AFL has formally announced that this years NEAFL competition will not proceed.

The impact of COVID-19 on all AFL competitions has created numerous challenges for clubs. Thankfully many forms of the game are restarting over the coming weeks.

Due to the interstate nature of the NEAFL competition and the fact that the four teams affiliate to AFL clubs were not able to participate it presented unique challenges in creating a competition that could run for the remainder of the season.

The Aspley Hornets willingly participated in working with the AFL/NEAFL as they attempted to construct a viable option; however, due to factors outside our control, this hasn’t been achieved.

We are actively working on behalf of our players and where they might be able to play for the remainder of the year, as well as the re-commencement of NEAFL in 2021.

It is a disappointing result for our football community, and the Board and Football Department appreciate the ongoing support of everyone involved with our NEAFL team including players, coaches, support staff, sponsors and our members.

We appreciate everyone’s support over these last months. We hope you will continue engaging with all the remaining teams that will be restarting this year as we reopen the club and bring our community back together.

Cafe open 10am – 2pm daily
You can book a table in the Cafe or walk ins will be accepted if we are not at capacity.

Premiers Bar now open from 10am Friday and Saturday.

MemberSAFE Update for Entry into the Hornets

Due to COVID-19 Restrictions we have launched MemberSafe to help fight COVID-19 and make it easier to visit the club. As per Queensland Health and Government guidelines we have to keep visitation records for 56 days.

Therefore for your privacy, and compliance with COVID Safe tracking we are asking all visitors to the club to join.
For $5.50 you receive great benefits being a Hornets member including:

This also allows you to sign in and out of the club with ease while COVID restrictions are in place assisting us to ensure your experience is as enjoyable as possible.
We appreciate your support and understanding during this time.

Thank you,
Danni and the Hornets Team.

Due to COVID restrictions we have new conditions of entry for our members, team and guests, we appreciate your understanding and compliance with the following.

Your entry to Aspley Hornets is conditional on acceptance of the following Terms and Conditions:

That I do not have any symptoms of fever, sore throat, temperature or illness, fatigue, or shortness of breath,

That I have not been in the company of anyone exhibiting symptoms as above,

I accept that I will abide by social distancing requirements,

That if requested to, records of members and guest’s attendance will be provided to relevant government departments specifically for COVID-19 tracing, and

Any non-compliance of above or with a direction to move, relocate or leave the venue from non-compliance may result in your details being passed to authorities.

This error message is only visible to WordPress admins


Error: No users set. Please visit the plugin's settings page to select a user account or add one to the shortcode - user="username".

Want latest offers, gaming and food promotions, news and updates then sign up for “THE STING” our Club wide newsletter.

Use this form to find things you need on this site